This book was awesome! Heartbreaking and hilarious like all Theresa's books. And don't even get me started on the descriptive prose. A sweet, passionate, charming (and festive!) Christmas novella. I loved Cat immediately and she and Gabe deal with a painful and complicated situation (Gabe was sent into the army 5 years ago because he and Cat were found in a compromising situation, and now he's back for Christmas and she's engaged to someone else) with surprising maturity. Also Gabe's adorable orphan is SUPER adorable. And Cat's Boring Fiancé wasn't boring at all! A+++++

I always love Jane Porter's women's fiction and this was no exception. I need to go back and read Kit's story, I didn't realize I'd missed it! Trigger warnings:

the heroine's mom has just died of cancer, her sister loses her husband in a car crash, and one thread of this book is from the POV of a woman who lost her teenaged son in a car crash. So good! This series is one of my favorite things in the world and this book was soooo gooood. Giles was my favorite thing in the world, an oldest child with a happy-go-lucky parent and an overdeveloped sense of responsibility, and Audrina was an acting-out rich girl with a mean dad and a big heart, and I always love that too. There was a scene when they were looking at the stars together, and this happened:

"The telescope found the moon, sudden and large and glowing[...]What seemed silver from afar was dull and gray up close, a steely pockmarked half-pie of scarred rock.

Something within him gave a lurch of painful feeling. 'It's not the way I thought it would be.' He straightened, tugging his arm from her grasp. 'Go ahead, look some more if you want to.'" Probably my favorite book in the series. A con artist/forger with no self-esteem and a suffragette reporter, what is not to love? Also I cried. A lot. OMG I can't even tell you how much I loved this book. I laughed so hysterically through the entire thing that I could not read it and eat or drink at the same time. I am emotionally exhausted after reading it. READ IT!

I'm giving away a four-pack of amazing signed books

Hi everyone! Every year at RWA I buy signed books to give away. Well, RWA is next week, and somehow I’ve got four books left. A Woman Entangled is one of my favorite romances ever and I've heard nothing but great things about the other three, so get on over to my blog and comment to be entered in the hat. I was super excited for this book because I adored Olivia in the prequel and was excited about another of my favorite trope: h/h goes undercover in a job they don't care about and then cannot bear to do the work in a subpar manner. In this case, Olivia goes undercover as agoraphobic Alastair's housekeeper and then can't help but get his household straightened out. OMG. I could not stop reading this book once I started. As I mentioned in my previous review, Meredith Duran is one of the best authors out there at creating genuine romantic/sexual tension and making me desperately want two characters to be together. Typically a hero as scary and alpha as Alastair would freak me out--and he DID--but I still wanted nothing more in the WORLD than for him and Olivia to be happy and to be together. The best Beauty and the Beast story I've read in a while. His adoration for her was so satisfying! This gave me exactly the high a romance novel is supposed to give, where I couldn't stop smiling goofily to myself during entire scenes.

TW for food/body/weight issues. Details below the spoiler cut:

At the beginning of the book, Alastair hasn't been eating because of his mental health issues and there are many descriptions of how unhealthily thin he is, often in a sexy/admiring way. This book was a revelation. Meredith Duran is one of my romance role models. I can't think of another author who is quite so good at creating an urgent sense of longing between two people. Exhilarating reading that used a laundry list of my favorite tropes--social butterfly with secret spine of steel, mean person learning that it sucks when all your friends are mean, trying to help the object of your interest land somebody else (in this case AFTER you've slept with them!), etc. etc.--AND THEN topped it all off with a big declaration demonstrating beyond doubt the depth of their love to someone who'd previously doubted. OMG. OMG YES. I finished this book with a huge grin on my face. I just love the way Louisa Edwards writes food, and working with food. And Rosemary was a huge geek, which is always cute, and the romance was so, so satisfying, but my favorite thing, my very favorite thing, is that this book has one of my all-time favorite tropes:

The one who really does love you, who doesn't understand why you aren't more grateful for the wonderful training they gave you in childhood, who you haven't heard from in months and then breezes into town, fucks up your life and your emotions, and then hits you up for a couple hundred bucks on the way out the door. Cf. original Battlestar Starbuck, Van from Fastlane, Mac from Once a Thief, Cassel from the Curse Workers trilogy, etc. I love it every single time and it was so well done here. OMG this book was note perfect. It's actually kind of rare that I read a book where I feel completely, 100% satisfied when I close it, and I was lucky enough to read TWO last week, one of which was this (the other was Jeannie Lin's The Jade Temptress). Devon was an asshole in JUST the right way, I was so so charmed, and the stuff with his son was wonderful, and when I realized he was going to have to learn not to be a food snob I was SO HAPPY. And I loved Lilah, and I was


kind of worried that Devon was going to have to realize that his asshole father really had his best interests at heart all along or something but he DIDN'T. YES!!! 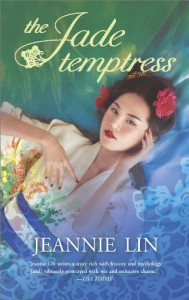 Jeannie Lin is one of the very few authors who consistently writes books where I wouldn't change a SINGLE thing. I mean a SINGLE, SINGLE thing. Every word of her books is perfect. And she has done it again. The cynical, elegant but street-smart courtesan and the rough cop, what is not to passionately adore? My first Lively St. Lemeston book, Sweet Disorder, is out in a couple of weeks from Samhain, so I'm giving away a free e-book and a swag pack (featuring rosettes, buttons, bookmarks, &c.)!

Nick Dymond enjoyed the rough-and-tumble military life until a bullet to the leg sent him home to his emotionally distant, politically obsessed family. For months, he’s lived alone with his depression, blockaded in his lodgings. But with his younger brother desperate to win the local election, Nick has a new set of marching orders: dust off the legendary family charm and maneuver the beautiful Phoebe Sparks into a politically advantageous marriage.

One marriage was enough for Phoebe. Under her town’s by-laws, though, she owns a vote that only a husband can cast. Much as she would love to simply ignore the unappetizing matrimonial candidate pushed at her by the handsome earl’s son, she can’t. Her teenage sister is pregnant, and Phoebe’s last-ditch defense against her sister’s ruin is her vote-and her hand.

Nick and Phoebe soon realize the only match their hearts will accept is the one society will not allow. But as election intrigue turns dark, they’ll have to cast the cruelest vote of all: loyalty…or love. Hi all! My next book, Sweet Disorder, comes out next month. Soon after that (in June and Sept.), my first two books will be rereleased. I have a new cover for In for a Penny and I’ll have a new cover for A Lily Among Thorns soon. In honor of all this wonderfulness, and finally being in print again, and moving to a new chapter of my career, I’m giving away my very last Lily trade paperback (signed and personalized however you like, of course). These things are hard to find, so if you’ve been wanting one, come comment on my blog to put your name in the hat! I’m giving away a signed copy of Jeannie Lin’s The Lotus Palace at my blog! It’s the first in a new Tang Dynasty series and let me tell you, I can’t wait to read the next one.

It is a time of celebration in the Pingkang Li, where imperial scholars and bureaucrats mingle with beautiful courtesans. At the center is the Lotus Palace, home of the most exquisite courtesans in China…

Maidservant Yue-ying is not one of those beauties. Street-smart and practical, she’s content to live in the shadow of her infamous mistress–until she meets the aristocratic playboy Bai Huang.

Bai Huang lives in a privileged world Yue-ying can barely imagine, yet alone share, but as they are thrown together in an attempt to solve a deadly mystery, they both start to dream of a different life. Yet Bai Huang’s position means that all she could ever be to him is his concubine–will she sacrifice her pride to follow her heart?